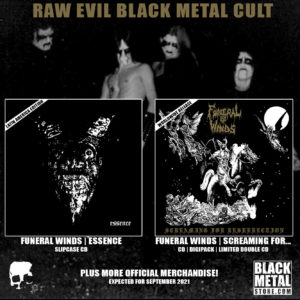 “Essence” will be reissued in slipcase CD limited to 300 copies with distribution for Latin America exclusively!
“Screaming for Resurrection” will have a worldwide edition in the following formats:
– 250 copies in jewel case CD
– 250 copies in DeLuxe Digipack CD
– 100 copies in exclusive Double CD. Extra disc will features old and rarities!
All copies will get extras like posters, stickers, bottons… with the well knowed ISO 666 PREMIUM quality releases from Black Metal Store.

And more to come….
Expect both “Essence” and “Screaming for Resurrection” to be released in Sept.21

The Tyrants of German Black Metal returns back with “Schwarze Bande”