INEXISTÊNCIA – “The ‘scene’ here is blatantly bad. The bands are in a ridiculous polarization where they only discuss politics and social causes.”

Inexistência has a few years of life and a lot to show in this brief time that is in the dark underground of the underworld. The band started as an instrumental one-man band and is now a trio that develops a Black Metal in the line of big names like Moonblood, Satanic Warmaster and Drowning the Light. With a demo, splits and some EPs, all released between 2020 and 2021, Inexistência is quickly becoming one of the Brazilian bands of extreme importance in the underground. With releases in and out of Brazil and currently working on his first album, Junior Lucifuge spoke to us about vampirism, the underground, censorship, movies, new bands, their influences and the origin of Inexistência in every single detail. Inexistência is one of the bands that, if you haven’t heard it yet, you’re missing out on one of the best projects in the Brazilian underground.

So, here is a little teaser to what is really coming…

How are things with Inexistência and how are you in the middle of the second pandemic year?

Inexistência has been going very well. We’re even surprised by the support and acceptance we’re getting. Both here in Brazil and in other countries in South America and Europe. I believe this pestilential climate of fear and death of people due to covid19 inspired us to create infamous things.

You participate in the split “Where White Gods Rest”. How was this invitation and participation with the other bands involved? Are there any other splits in progress or something new in progress at the moment?

The idea of ​​this split I had for a long time with Além-Homem, it was just a matter of signing. Paarthurnax joined later and was just a great complement to the split, as it is another great respectable band in the Brazilian underground. We have several split invites, despite the short time in the band. We will not bend to all the invites, we won’t release splits with any band, just to have something released, as we see many bands doing. We prefer to only join with true brothers of darkness and intolerance. This year there will be a split with the band Incestum from Mexico and one with the band Escuridão Atordoante, here in Brazil. For next year, we have already settled splits with Funeral Fullmoon and with Vanagandr, two excellent bands from Chile. We have more splits, but I’d rather be more sure if they’re actually going to be done, to say the least.

What is the formation of Inexistência today? It was a duo in the beginning with the demo tape. What is the role of each one in Inexistência? lyrics, arrangements, images, logo? Is there involvement of other people or artists who are not directly linked to Inexistência?

The current definitive lineup is: Lucifuge: Vocals and keyboards

Generally we all contribute. Nero Shaitan composes the guitars lines, makes the lyrics, I make the keyboard lines (mainly in Dark dungeon synth compositions) and contribute in the lyrics, Diabolus Polish does the bass and drums, but he also opines on what can be changed to stay better and makes all the band mixing in his studio.

How do you see Brazilian Black Metal scene in general, if we compare the underground in other countries?

Unfortunately the “scene” here is blatantly bad. The bands are in a ridiculous polarization where they only discuss politics and social causes. This in Black Metal? They do social events and there are bands that still include Christians in the line-up, because the guy knows how to play an instrument that they need. Yes, we’re on that shameful level. Radicalism went to shit! That’s why we do an apartheid with most bands here. But there is a mafia of good allied bands that still carry the ideological content with honor, arrogance and who really are what they say they are in their lyrics. We prefer to segregate from this “politician’s idolatrous kind”, let the stupids to the stupidity.

Let’s go to the tough questions:

a) What best Black Metal album of all time? Why?

This question is impossible to answer. But I can mention one of the ones that most influences me: Drowned, by Drowning the Light. I think it’s a superb album.

b) Which Black Metal album you don’t like and everyone likes?

The Laws of Scourge of Sarcófago. Not that it’s a bad album at all, but I think it’s overrated.

d) What was the first Black Metal album you heard and when?

What other projects are the members of Inexistência involved in? Could you recommend some of them to us?

We have several projects in development that will probably come out this year. But, mentioning one of mine that has already come out, there is Nosophoros, which is a Dark Dungeon Synth/Avantgarden with a theme dealing with vampirism and the occult. It already has a demo called Ritos Vampirescos Sob a Lua Invernal, and there will come a split with Concordia Diaboli from France.

Musically what are your biggest influences? How do you apply them to Nonexistence? Is there anything you’re thinking of introducing into Inexistência that you haven’t done yet? Something experimental for example?

Everyone in the band has very similar tastes and, in a way, this is one of the reasons why the band works very well. We listen to a lot of bands like: Moonblood, Drowning the Light, Lamentation, Lord Wolf…

Was Inexistência is designed to be a studio project only or are there plans for live performances?

…COMING SOON in the PRINTED EDITION…

You will find the full interview in issue 2 of BLACK METAL TERROR magazine which will be released in early September. 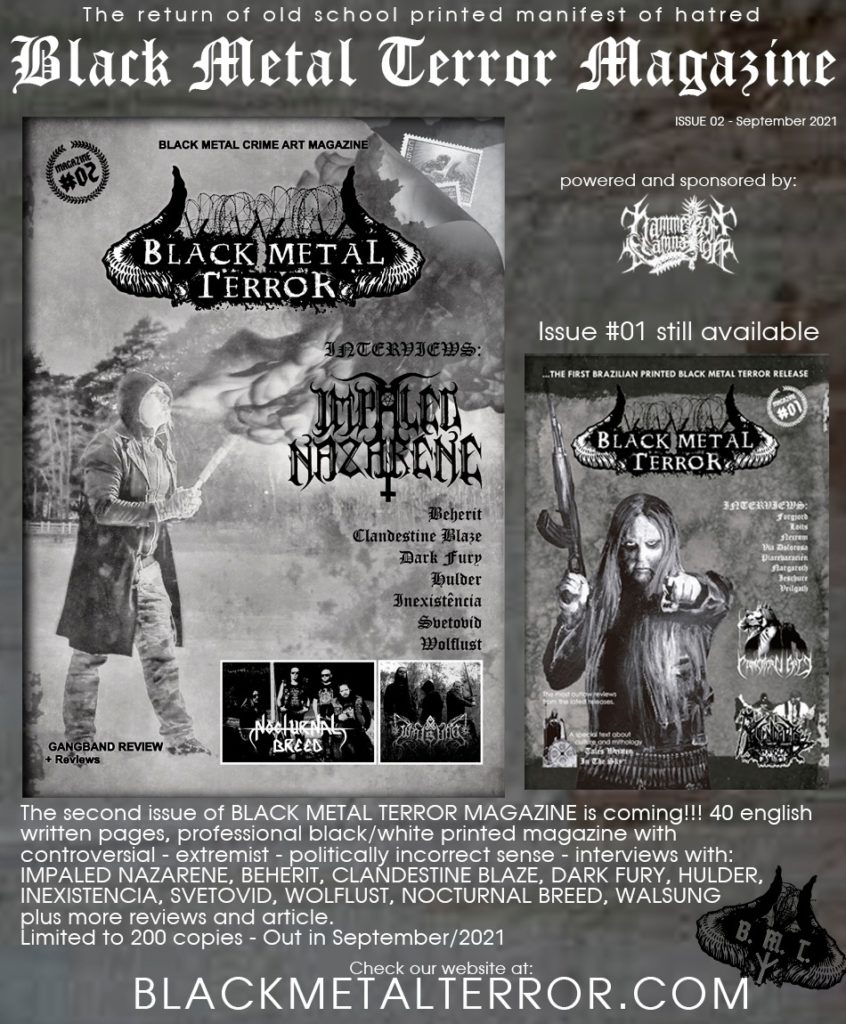