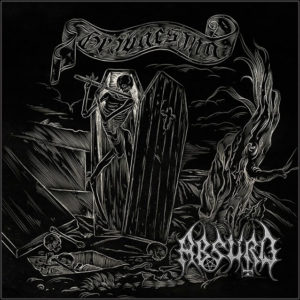 The Absurd horde does not need any kind of presentation having its name highlighted among the most influential and controversial bands within the German Black Metal scene with a history that began surrounded by numerous controversies involving ideological extremism and even deaths and arrests. But time brings wisdom and the truth is that a lot of water has passed under the bridge in these almost thirty years of the band’s existence and the ideological base of the current members has certainly matured along with them as well as the band’s musicality and the reason for this review is just focus on the musical part presented by Absurd and leave the controversies aside for the gossip magazines to worry about. “Grabgesang” has as its proposal the interesting mission of bringing five songs originally composed by former guitarist and vocalist Sebastian “DMD”, one of the founding members of the band, performed by the current line up. Since the album “Werewolfthron” released in 2002 the band has been in charge of the founding member Ronald Wolf and Sven Unhold and this partnership brought with it some very unique but subtle new characteristics to the band’s music such as a better musical production, some guitar lines with more complexity and a certain “visual identity” to the graphic work of the releases, something that added much more individualism to the unique sound performed by the band without detracting from what the tyrants of German Black Metal already did since its creation. In 2019 Gelal Necrosodomy, also known for being part of the iconic bands Grand Belial’s Key and Arghoslent, also joined as a member of Absurd, completing the team that recorded “Grabgesang” . But talking about what really matters, the five tracks featured in this release are simply phenomenal, those who already know and like the band’s previous stuff will certainly not be disappointed at any time and those who still don’t know or haven’t enjoyed the previous albums should give this release a chance. For old fans all the characteristic elements of the band are present, the dark guitar lines, the unique vocals with desperate passages and the lyrics predominantly in German; but for those looking for something new, the compositions present some beautiful moments with fabulous solos, harmonies and guitar melodies that surpass everything the band has done before and that border on perfection. “Grabgesang” starts with a true declaration of love for war,” Im Kriege Ewiglich”, fast, raw and direct this track has a riff in particular that reminded me something of Grand Belial’s Key at the time of the demos, especially in the rhythm of the drums, the solo of this song already shows that the band brought something different and this combination between the old school and the new proves to be the right decision of the whole work; the current line up managed to take DMD’s compositions and take them to an even higher step. Coincidentally I talked to Sebastian himself a few weeks ago and he said he was amazed at the level his creations have reached in the band’s skillful hands. In his own words “The Mcd is like a German tank driven by rage and darkness, with great haunting melodies”.  The title track comes next with a slower tempo and bringing a morbid and gloomy sound, the title “Grabgesang” means “Funebral Song” in German and fits like a glove in this release because the atmosphere of mourning permeates the soundscape of the whole album;  death and darkness, sung in a poetic, taciturn and melancholy way; impossible not to shiver as the doubled vocals start to sing the chorus “Düster sing ich Totenlieder,”. “Magnum Latrocinium” is the next track and highlights the pulsating bass line and Wolf’s vocals setting the rhythm of the composition, the contrast between the beginning in mid-tempo and the simpler guitar riff with the middle part of this song with a more accelerated  rhythm and with a complex guitar work is very interesting. We continue with “Innenschau” and this track brings probably the most desperate vocals I’ve ever heard in an Absurd song contrasting with the more atmospheric instrumental full of small details in the arrangements bringing many layers and textures; it’s amazing how you notice after a few listens how the lyrics of this song seem connected to the instrumental part with both completing each other so perfectly. The last song is “Pure Darkness”, the only track with the lyrics in English and that was born classic entering that selection of special Absurd compositions along with others such as “Mourning Soul”, “Gates of Heaven”, etc; the vocals in this track are sung in a melodic way and the harmonies created between the main vocal and the backings are sensational; ; To further enrich the track we have the guest lead guitar participation of Set Teitan, former guitarist of the mythical Dissection and currently on Watain. A track that is, at the same time, extremely epic and melancholy and that became my favorite song of the band.

“Grabgesang” certainly arrives in this year of 2021 amidst a flurry of good releases and showing itself ahead with a good advantage over the majority, maintaining the high standard of quality of the band. Those who cannot see the brilliance of this band in the name of a pseudo politically correct posture have not understood anything that Black Metal has shown us in the last forty years and are depriving themselves of knowing one of the best representatives of the style solely by maintaining a doubtful  and questionable mentality. Show your total scorn and disdain for the weaknesses of this mediocre modern world and acquire this masterpiece as quickly as possible. Totally mandatory.