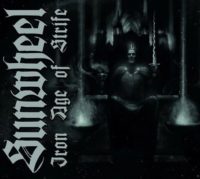 We had to wait a bit for the release of Sunwheel’s new album. After the memorable “I am the One” of 2018, Poles return with “Iron Age of Strife” released on August 4th, 2021. Sunwheel’s covers have always captivated me. They transcend album content and add an interesting sensory dimension when you listen to the albums and look at the details of the art.
In “Iron Age of Strife” Sunwheel didn’t skimp on quality and on developing a high level Symphonic Black Metal.
The tracks go beyond 6 minutes in length, which is really nice. The tracks develop well and have points of harmony and rough sound, which is a hallmark of Sunwheel. We’re not talking about a Dimmu Borgir-like band. It’s symphonic, but also brutal in its guitar and drum lines.
“Solar Path of Power” is a complex track. Lots of beats, tremolos and a devastating battery. The synthesizers and keyboards seem to support the other instruments in a very well done symbiosis, the Sunwheel is far from being boring to hear, on the contrary. It’s extremely captivating. The guitars on “Crown of the Seventh Seal” are pulled into a Death/Black noventits a la Morbid Angel, which is very interesting. The highlight here are the vocals that seem to drive the track, giving it a harrowing sound depth. The riffts are well constructed, reminiscent of BM’s second wave.
“Unlock the Paths of Sorrow” is almost 10 minutes long and is an example of a complex but straightforward track. Tremolos are the highlight here, “Norwegian” guitars with icy Polish timing. Straight and raw in essence, it is reminiscent of what Dark Fury did in Flooded Lands with a steady thump followed by vibrating guitars and raging riffs. One of my favorite tracks.
In “Word of Secret Light” the sound is dragged with some riffs that take the slow time of the track, the setbacks are very well elaborated and with a lot of technique and timing. This is the Symphonic Black Metal that I like, it has the harmony and it has the weight and characteristics of the band, it has the essence and maturity that we expect from one of the great names in the Polish scene.
As for “Scepter of Destiny” speed is the buzzword. A beautifully executed BM with apocalyptic timing and a catchy chorus makes a big difference when it comes to raising Black Metal to another standard of quality. On “Lidless Wells of Dreams” we have a Sunwheel brand, a more lilting and darker Black Metal, the harmony is there – don’t get me wrong – but there is a dark and dark atmosphere that guides this track. The guitars with a line from the 1st Generation of BM give this tone while we have a roaring vocal and present in the vociferated phrases.
In “Taniec Run” we have another track sung in Polish. That’s right, Sunwheel merged into the English album, to make their message understood, but also brought a touch of perfection to their mother tongue.
What to expect from this Sunwheel album? It’s a mature, strong, concise album. The harmonies and symphonic Black Metal are there, but there’s something more in the lyrics, in the riffs that give the album a WAR appeal. It is not new that Sunwheel releases albums with quality, but it is with this album “Iron Age of Strife” that we have the consolidation of a high level Polish Black Metal and that puts Sunwheel at the top of the icons of Polish Black Metal. This album is a milestone for extreme metal and for Black metal itself.