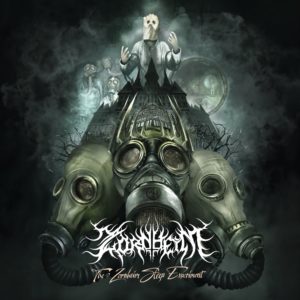 What happens when you mix in the cauldron of your own ideas equal parts of Dissection, King Diamond and Dimmu Borgir ? You simply create one of the best, if not the best Extreme Metal album of 2021; the year isn’t over yet so I’ll give myself the benefit of the doubt, but hardly any band will surpass the perfection of “The Zornheim Sleep Experiment”, second album by the Swedish Black Metal band ZORNHEYM that returns four years after the release of “Where Hatred Dweels and Darkness Reigns” and proves that the genius of their first album wasn’t just “beginner’s luck” In fact, Beginner is something that Tomas Nilsson, aka Zorn, mentor and main creative force behind this project, certainly isn’t, having him in the past,  been a member of bands like Dark Funeral and Devian, but it’s not frivolous to say that it was only when he founded Zornheym that he started to fully utilize his creativity and the quality and inventiveness that the band’s music shows is full proof of that statement. A band that brings extremely technical and demonic guitars that drank abundantly from classical sources also adding strong Swedish Black Metal influence from bands such as the aforementioned Dissection, fast drums like a machine gun and accurate as a sniper shot at point blank range, orchestrations performed by a real string quartet ,which fully complement the band’s classic vein and also brings a whole cinematic atmosphere to the soundscape ;  and tha extremely versatile and theatrical vocals of Jan Richard Bendler Anderson, keep that name in mind, because the way the vocals are worked in “The Zornheim Sleep Experiment” is something I’ve rarely seen on an Extreme Metal album, not only for the aforementioned versatility of Bendler who wanders between guttural, harsh and melodic vocals with immense aplomb, but also for the masterful way in which the vocals are fitted, dialoguing with extreme precision with the other instruments as if it were guided by a conductor, the way that the metrics of the phrases are carefully thought out and how the interpretation manages to bring an extremely emotional charge, giving you in a very “visual” way at the same time all the elements that the music wants to convey to you and everything that the lyrics want to tell you. The compositions presented by the band are very complex with an extremely intricate instrumental construction, however the music flows in a pleasant and easy way and your ears will certainly assimilate it naturally. Here I open a parenthesis to express my personal opinion that a clear sign of the band’s genius lies precisely in the fact that they managed to create something with such great complexity but easy auditory digestion… Brilliant !!!

But you can still question me if “The Zornheim Sleep Experiment” is really an album, as good as I’m saying. Well, actually it manages to be even better than what I’m trying to describe. In addition to the brilliant musical part, the band’s lyrics form a whole unique, rich and interesting concept. In the first album “Where Hatred Dweels and Darkness Reigns” we visit the Zornheim Asylum for the criminal insane, a pretty obscure mental institution and we’re introduced to some pretty peculiar inmates to say the least. The thin line that separates sanity from madness, the rational and the supernatural are the themes implied in the compositions and the album ends up open to countless future possibilities. Well, at first, the promo that the label sent me for “The Zornheim Sleep Experiment” didn’t have the lyrics, and  my personal experience with the album was somehow crippled by this detail, as one of the peculiarities that most caught my attention on Zornheym’s first album was precisely this sick and sensational story being told. The band however sent me the lyrics a few days later and it totally surpassed my expectations managing to surprise me a lot because they follow the events presented on the first album in a way that I really wasn’t expecting and it still manages to work completely independently, What I mean is that even if you don’t know what was told in “Where Hatred Dwells and Darkness Reigns” you will be able to fully understand “The Zornheim Sleep Experiment”. The songs have a soundtrack role in this mind-blowing story and honestly it’s not hard to imagine this whole concept presented by the band being transformed into a successful series on Netflix… Well, while that still doesn’t happen the band brings along with the release of the album an awesome graphic novel that expands the boundaries of the concept of “The Zornheim Sleep Experiment”.

It’s impossible to highlight a track on such a cohesive album that basically works as a “closed block” with a beginning, middle and end, but some moments that I would especially indicate for those interested in getting to know the band would be the opening track “ Corpus Vile” which already brings in its first moments all the characteristic musical elements of the band already mentioned, “The Revelation” which shows the most critical moment in the story and manages to musically transmit all this climax of tension with perfection; I would also mention the tracks chosen as singles by the band “Keep The Devil Away” which got  a fantastic video passing all the visual elements behind the concept of Zornheim Asylum and “Slumber Comes in Time” which in addition to being portrayed in a great lyric video, is a track that has a chorus with extremely bombastic and striking voices, with some vocal embellishments in its second repetition that border on perfection, the solo has a clear classical influence and its ending sung in Swedish has a strong Folk inspiration, in fact when asked about it , Zorn himself confided us that “The epic chorus of “Slumber Comes in Time” is based around a folk tune from the 16th century that the Wallons brought to Sweden. The male choir and the epic orchestral parts present a new side of Zornheym’s crushing sound” So basically the wallons, people from the south of Belgium brought an old folk tune to my home town many years ago. That melody has always been very special to me since it’s also has a connection to my home town”. In my personal opinion it’s not only the best song on the album but one of the best compositions I’ve heard in my life.

“The Zornheim Sleep Experiment” is not just an album, it is a unique experience that every Extreme Metal lover must undergo, sipping every drop of delight and agony that its 37 minutes will provide you with the full awareness that entering through the gates of Zornheim is an invitation to discover the deepest and most unknown abysses of human madness….It’s a totally mandatory item in your collection, just buy it NOW!!