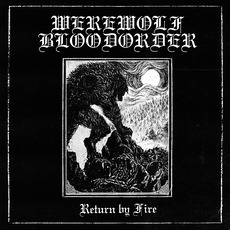 It’s been a while since Werewolf Bloodorder came out of the shadows and presented a demo in the mold of the 90’s as it hasn’t been seen for a long time.
Primitive, old, raw and with a very well executed raw black metal, the duo arrived and brought all the analogue essence that the 90s breathed into the 21st century.
The question was: And now, what would come next? How long would we have to wait?

The answer was a three-track sonic cataclysm under the moniker “Return by Fire” released as a 7″ EP that will soon be available and more than a succession of what was the “Rites of Murder and Sacrifice” EP in “Return by Fire” has an aggressive and hazier sound than the previous one. The guitars seem recorded in the 90s, the drums are heavy and the blastbeats are there guiding the journey between the three anthems that mark the return of the infamous Werewolf Bloodorder and the assertion that the cult of death and darkness will never disappear.

“Awake the Rise of Death” is the first track on the EP and is a track that shows that Black Metal has a timeless essence and it is possible to travel through the darkness guided by the vivid chords of a melody that anticipates the imprisonment of our souls. Melodic, direct and mystical.

“Return by Fire” is the title track of the EP and it’s more than 5 minutes of rough Black Metal, as it has to be. From the beginning, the beat and the guitars remind us of what Evil has already done in Hammerstorm and what Warlord presented in the split “De Volta aos Crimes Primitivos“. It’s that guitar and that nervous drums we see appearing around here, at the same time it has a constant presence of a Satanic Warmaster aura, the highlight here is Warlord’s destructive vocals that seem to improve with time. It is not surprising that such quality of the WBO comes from his experience in the underground world, placing him among the greatest representatives of the national underground scene, it is the least we can expect from this old wolf. And it’s worth mentioning that F.Daemon brings a lot to the EP with most of the guitars imprinting his personality recalling Evil’s heydays. And speaking of guitar and bass quality, it’s not because the sound is raw Black Metal that the quality should be low, by no means, there’s rawness and quality to this track that makes it one of the best tracks I’ve heard this year.
In the middle of the track we have loopings, slowdowns and a vocal that echoes in the eardrums and then comes back in full force to the raw, slurred beat we enjoy. A masterpiece!

The last track and not least is the classic “A Southern War from the Winter’s March” which I didn’t need to mention is an EVIL cover, right? This track got even stronger and darker. There’s not much I can comment on this extreme metal anthem. Evil lives and will live forever. As Warlord roars and chants his weapons on the battlefield, it is the Evil standard that will be above his head blazing.

In “A Southern War from the Winter’s March” we have not the memory of something ethereal and constant, but the proof that the WBO treads paths far in time, adds more blood to the path of thorns that Evil opened by opening wounds that will never heal in the brazilian underground.

Listen… IF YOU CAN!