FUNERAL WINDS sonic massacre has begun in Rotterdam, South Holland right at the height of the second wave of Black Metal. Influenced by the first wave Black Metal bands like Bathory, Venom, Hellhammer, Sodom, Funeral Winds took a path of real Black Metal, raw and focused on a sinister path in their motivations. Defending the flag that Black Metal is intolerance, Hellchrist Xul, leader of Funeral Winds, spoke with BMT and traced in detail the band’s hateful path, their influences and the new album ‘Gruzelementen’ released by Black Metal Store. Funeral Winds has a long history, but it also still has a lot to show to the underground world.

Funeral Winds is around 1991, so you got the essence of the first Black Metal wave in the 90s. What was it like for you at the time? Tell us a little about the very first beginning.

Funeral Winds came into being in 1991 which coincides with the beginning of the ‘so called’ second wave of Black Metal. Our main influences at the time were mainly first wave Black Metal bands like Bathory, Venom, Hellhammer, Sodom etc…

I listen to Heavy Metal since 1984 and got attracted to it by the dark imagery of bands like Iron Maiden, Ozzy Ozbourne, Mercyful Fate, Judas Priest… always searching for the darker and more extreme bands I soon found out about bands like Venom and Slayer.

The best thing about the second wave of Black Metal bands was that many of the people involved were (or pretended to be) real Satanists or Misanthropes which caused the genre, or the individuals ruling the scene, to be feared. This is what today is mostly lacking… the gross of nowadays Black Metal is just catchy and melodic music with ‘safe’ lyrics, it’s all about how can we come over as sinister but not hurt any ones feelings.. how can we reach as much of a big audience.. it’s pathetic! Black Metal always has been about extreme visions, Satan, Hate, War, Misanthropy and aggression, etc. There never was a safespace in Black Metal in the early nineties. Black Metal in the early nineties meant that when you were visiting a concert there was always the risk you got into a fight by just wearing the wrong t-shirt or by having the wrong opinion. There were definitely rules to follow or you could get into trouble. The Black Metal scene of today consists mainly of hipsters on one side and try-hards on the other side. 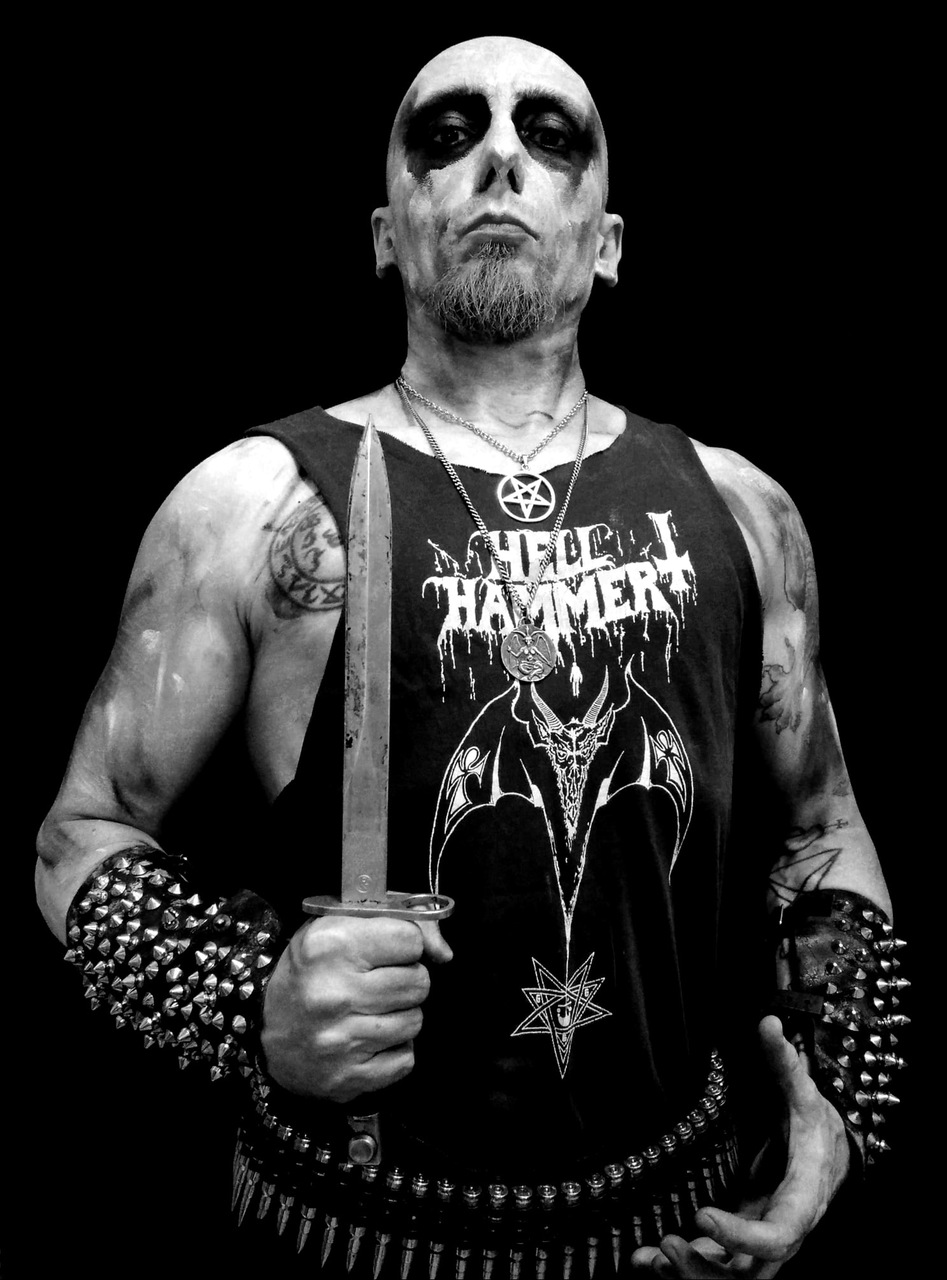 The first split that you are part of is “Screaming for Grace” with Abigail. How was it like to be released with Abigail?

The split was released by Warmaster Records from Colombia in 1995. We had been tape trading between Abigail and Funeral Winds prior to this and Bull Metal of Warmaster Records offered us a deal to release this split CD. Nuclear War Now! Productions recently released the Funeral Winds recordings of this split with the recordings of the 7” ep and ‘Resurrection…’ demo on a double LP and Cassette. A CD version will be released soon via Hammer of Damnation and Necromanteion. This album is called ‘Screaming for Resurrection’.

Funeral Winds is recognized by the atmosphere, mainly the guitar atmosphere, something that we can find since the first album. When you are recording, what is your creative process? The lyrics come first or the arrangements?

The arrangements come first. I basically hear something in my head that I try to recreate on my guitar, then I add in the rest. I only write music when I’m in the right setting and when I’m in the mood that is necessary to create this kind of music, this is essential to get the right energy flowing through me. This basically means that I light candles on my altar and wait until it comes to me. It happens often but not always that parts of the lyrics come to me at the same time, which I will write down and later on use to create the lyrics. In some occasions it happens that only lyrics come this way and I’ll write music to fit the lyrics, but mostly it’s the music that comes first.

What are the Funeral Winds main influences? Are they different from your ( Hellchrist Xul) influences?

Since the last three albums all influences come through me. Before that there were more people involved, however I think it can be said I always was responsible for the biggest part of Funeral Winds compositions. As for Funeral Winds main influences…. besides the bands that have clearly left a mark upon Funeral Winds: Venom, Hellhammer, Bathory, Mayhem, etc… I would say the main influence is the Sinister, the Satanic currents, visions, etc. Everything that is part of my personal path.

Which Black Metal albums have you listened to for a long time and which ones have you still listening to?

If you could introduce Funeral Winds to a person that has never listened to it before, what would you say about your music?

That this is ‘Real’ Black Metal, with real Sinister intent, unlike the music that is wrongly labeled as Black Metal nowadays…  They should use their own senses and make up their mind if it’s something for them or not.

Your new album will be released in South America and worldwide via Hammer Of Damnation, how did this partnership started? Tell us a little.

The new album ‘Gruzelementen’ has been released worldwide by New Era Productions and for Latin America by Black Metal Store, both in conspiracy with Necromanteion which is my own label. Over the past couple of years I have been in contact with Luiz of Hammer of Damnation about the possibility to have all Funeral Winds material to become available via him for Latin America. He is a serious person, very passionate about Black Metal already since the old times and very professional in how he works, so it was an obvious choice to work with him to realize this.

If you could have recorded a BM album, which album would you choose?

What influences you lyrically? Which topics are usually on your music and why?

The lyrics are mainly based around Traditional Satanism, mythology, the Sinister, etc… everything that is part of my personal path.

Which BM bands from Brazil have you ever listened to? Any band you remember?

We are living in a period that people are “cancelling” others on social media and the internet. Have you ever  been through protests or this kind of thing?

Things got cancelled/botcotted  already in the nineties when there became more attention to Black Metal from outside of the scene. In recent times this cancelling got worse, not only if it comes to Black Metal.

You are busy with Funeral Winds now, but you also have a project called “Domini Inferi”. Could you tell us a little about this one? It is a one-man band project, isn’t it?

A new Domini Inferi album is in the making. Just like recent Funeral Winds albums I am the only one writing and recording all music. For those that never heard this project, check out the albums ‘Devil Cult’ and ‘In Nomine Domini Inferi – The Second Coming’ at https://dominiinferi.bandcamp.com/.

When we talk about BLACK METAL itself. How would you define Black metal in your own words?

A darker subgenre of Heavy Metal that lyrically deals with the Satanic, Occult, Misanthropy and the Sinister…

Before the new album you released “Essence”. I think it has a great atmosphere and also it is not boring to be listened to.

‘Essence’ was released by Avantgarde Music in December 2020 and will now be available via Black Metal Store on slipcase CD for the Latin American region.

Funeral Winds is from Netherlands. Are you born and raised there? How is the BM scene in the Netherlands?

Yes I was born and raised in the Netherlands. Funeral Winds originated in the Netherlands in 1991. I live in the Czech Republic since 2018 but since I have the Dutch nationality Funeral Winds remains Dutch. I don’t keep track of the Black Metal scene in the Netherlands. There are some bands and individuals I keep in contact with but in general my opinion about the the Dutch scene is that it’s overall not worth to be called Black Metal if it comes to most the new bands. New Era Productions releases some interesting bands/projects. Besides those, some of the older bands that are worth to check out are: Infinity, Hekel, Gestalte, Bestial Summoning, early Countess, Galgeras, Fluisterwoud, etc.

You have worked with a lot of labels. But you also  went “Independent” sometimes. Which are the benefits of releasing Independent without a label?

Total control over the graphics, the release date and keeping a larger percentage of profits. Of course it also means  that you have to spend more hours on the promotion, the packing and shipping of orders, etc.

If you could send us a message it would be great. Thanks for this interview.

Thank you for the interview. Check out the new album ‘Gruzelementen’. ‘Essence’ and ‘Screaming for Resurrection’ CDs should be out soon via Black Metal Store and Hammer of Damnation. BLACK METAL IS INTOLERANCE! 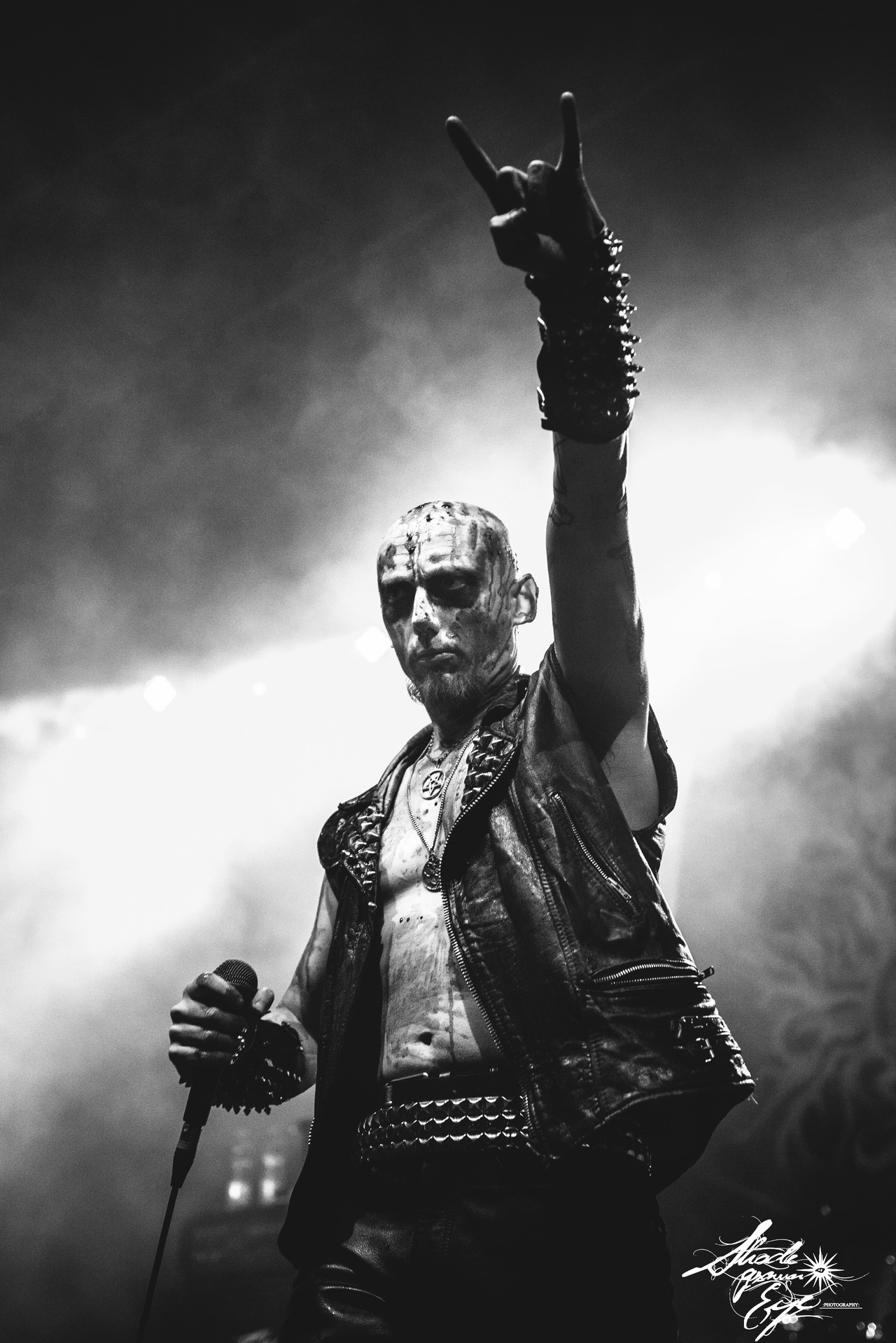