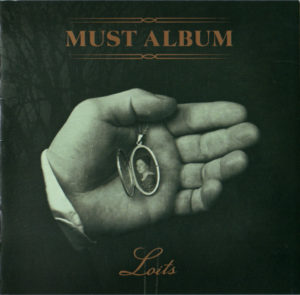 Originally released in 2007, “Must Album” is the third and, to date, last album by the Estonian Black Metal band LOITS and is one of those rare works that was born classic and cult, although posterity may take some time until recognize the grandeur of its brilliance, something that is common to happen when the art brings with it elements that are ahead of their own time, as is the case here. Starting with the cover arts that the band uses, which are at the same time very beautiful and taciturn and match perfectly with the music presented on the albums, but which are a little different from what we are used to seeing in Black Metal bands. Talking about the music, Lembetu’s vocals are extremely versatile bringing a devilish cold harshness, but with unexpected passages recited and sung; and all the vocals variety is probably the right choice for “Must Album” because it fits perfectly with the diversity of influences presented in this album, which is something very noticeable. We have moments inspired by the purest Scandinavian Black Metal, as evidenced by the morbid and obscure opening track “Emaraud” which in some passages takes us to names like Satyricon and Darkthrone, we transit through movements almost Doom Metal as in the tetrical and melancholic “Veealune Valss” and we even travel through more Folk and experimental elements like the sensational and totally bizarre “Surmarestoran”. The guitar work by guitarists Lauri Kuriks and Markus Karmo is excellent with catchy riffs, great melodies and some extremely atmospheric harmonies as seen in my favorite track “Peegli Ees” . It is also interesting to note the groove present in some tracks such as “Sudelda Neidu” and the fantastic “Ei Kahetse Midagi”; this facet of the band in a more “Bloody Motorhead” vein had already been explored a little in the band’s previous work “Vere Kutse Kohustab” from 2004, but here it was cut with much more care and becomes more visceral and better fitted to the band’s sound, justifying the term ” Flak ‘n ‘Roll’ adopted by the band itself to describe the type of music they play. It’s important to say that all this rich amalgamation of influences becomes something extremely natural and cohesive, not sounding artificial or forced at any time because the backbone of the music played by LOITS is totally based on Black Metal and all this musical variety only crowns the great creativity and the band’s genius. Another thing to note is the unique choice of dark keyboard tones that LOITS uses in “Must Album” and the instrument’s own musical arrangement in some extremely creative and unconventional passages, listen to the second track “Soomusronglases Silmi” or the beginning of the fourth track “Kiri Kaevikust” and you’ll understand exactly what I’m trying to say; The surgical use that keyboardist Karje makes of the instrument in the compositions shows us that a clear vision of the music itself is fundamental and that often “less is more”. One more thing that needs to be commented on is the insane work of the drummer Marko Atso, the guy is a monster and the details that he puts on the tracks are phenomenal with ghost notes, tempo changes and counter beats that are absurdly well thought out and well fitted, listen to the last track of the album “Öölaul” and try to understand how crazy the guy is, or a genius, or both.

I dare to say that LOITS is perhaps one of the most original and creative bands today and it is at least curious that an album as grandiose and visionary as “Must Album” has not received the due recognition it deserves, something that perhaps can be remedied now, fourteen years later, as the label “Hammer of Damnation” is re-releasing this wonderful masterpiece in an awesome digipack version with a gorgeous 24-page booklet. If you already know the band you certainly already have your copy, if you don’t or don’t know LOITS, shame on you. Run and get your copy through the link below.