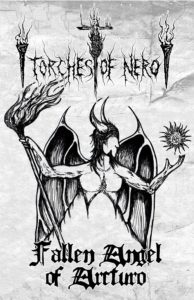 I see many metalheads , especially those over forty years old often complaining about the excessive amount of bands that come out every day. Many of them claim to have stopped in time years ago and only listen to bands from their youth, not interested in digging new names into the underground. Personally, I can’t imagine what makes someone who likes metal think that way, I even understand that there are too many bands appearing and there’s definitely a lot of crap among these hordes; however, one of my greatest pleasures has always been to delight in discovering new gems within the scene and there isn’t a day that I don’t make myself appreciate at least one new band. My most recent “discovery” was this wonder called TORCHES OF NERO, from the south of Brazil this power trio was formed in 2021 and in a few months of existence they have already released this sensational demo called “Fallen Angel of Arcturo” with almost forty minutes of a Black Metal that is a true ode to Metal performed in the late 80s and early 90s and an explicit declaration of love for Greek Black Metal from that period already mentioned. The cover art is simple, the band’s logo is rough, the production is minimal keeping all that “live” atmosphere and these elements are perfect in the band’s proposal; I would hate to hear any future TORCHES OF NERO’s releases made with some plastic and artificial music overproduction. Everything here exudes that dark energy experienced by all those who already have a few gray hairs on their heads and if you close your eyes while listening to this pearl, you will have the impression of being in the same room where the band recorded this demo. All of this just makes me want to open a beer, go to the front of a stage and bang my head watching the TORCHES OF NERO playing alive. The demo starts with the track “Kleronomia kai skotos” that means “Inheritance and Darkness” in Greek and the name already shows that the passion for Hellenic Metal here is really strong. The title of this composition fits like a glove bringing strong influences of bands like Necromantia and Rotting Christ with some great melodic lines, highlighting the small details created in Overkill’s bass,the  drummer Antimater’s cymbals work and the vocal so individual and full of Baal Seth Penitent’s own personality that manages to transmit all his hatred and anger contained in a torrent of hateful and grotesque vociferations. We continued with “Azazel (When Baphomet Went to the Court)” and I confess that I was curious to follow the lyrics of this song; Baal, who is responsible for the lyrics of TORCHES OF NERO, really studies the topics covered by the band in depth and it’s a shame I haven’t had the opportunity to find out about this content yet. The song has fantastic drum work with broken passages and Antimater abusing the tones giving a “tribal” feeling to the track, which also has a passage with a slower, morbid and gloomy tempo. The next track is called “Vεκρομαντικές τελετές” another one with a Greek title and meaning “Necromantic Ceremonies”, this song is composed only by atmospheric keyboards played by guest Blackpest member of the bands FETO\VOID and the vocals narrated by Arkhon Sakrificer of the band TEMPLE OF EVIL from Cyprus. In the sequence we have “Mother of Demons” which is a more raw and cold composition and that brings with it all that Black Metal soundscape of the 90s with the lyrics addressing the figure of Lilith. We continue with the title track “Fallen Angel of Arcturo” which for me is the best song on this demo with its Speed\Thrash Metal beginning with strong Slayer inspiration from the first album and a spectacular transition to a riff that seems to come straight from the classic album “Thy Might Contract” by Rotting Christ, the track is a true chimera ending in a passage that brought to my mind names like Blasphemy and Beherit from the demo era. The stuff ends with the ritualistic and atmospheric track “Necromantic Rites” and its tribal drums, a true tribute to the band Necromantia,

TORCHES OF NERO appears to me as a pleasant surprise from the nacional underground scene and for being such a young band presenting such quality work leaves me with very high expectations for their future releases. May they keep the musical and aesthetic formula shown in this demo and never lose their essence as we need more bands daring to stay true to their roots and that don’t want to reinvent the wheel. To all metalheads over forty years old and to all metalheads who appreciate Black Metal made with soul and passion, I highly recommend it. Without a doubt, a mandatory item.