The band TORCHES OF NERO is proof that new discoveries that drink from old sources can still surprise us. Arising from the south of Brazil from the womb of the world pandemic in the present year of 2021, these bastards managed in a few months to organize themselves and record the artifact “Fallen Angel of Arcturo”, one of the best underground demos in recent years. And to talk a little more about this demo and what the future holds, we at BLACK METAL TERROR had a chat with Baal Seth Penitent, vocalist and guitarist of this grateful promise of Brazilian Extreme Metal.

“Fallen Angel of Arcturo” is a declaration of love for that Black Metal played in the late eighties and early nineties and mainly to Greek Black Metal at the time. Do you agree? How did you become interested in the Greek scene at that time and in your opinion would Torches of Nero exist without the inspiration of that Hellenic scene?

I completely agree! My interest in the Greek scene dates back to the mid 90’s when I heard Rotting Christ and then Varathron and Necromantia. They are part of my life and Rotting Christ is by far my favorite band as Sakis Tolis is the godfather of our band. It certainly wouldn’t exist! The influence is so great that the first name of this project was Dark Abyssic Black Cult. However, because we understood that we needed to add something of our own, we chose another source of darkness which is the extreme metal from the mid 80’s made in Brazil. Our idea is to mix, moving between these two styles, trying to offer our own face to the sound made by us. Without intending to do something new, but that makes sense for us

Is this interest in the Greek scene limited to those names that marked your youth or is there a more recent band from there  that has caught your attention?

It mainly comes down to bands from my youth. Rotting christ, Varathron, Necromantia, Tatir. I met Kawir afterwards as well as Acherontas. Today Chaosbaphomet, Empire of The Moon and Funeral Storm as well as Yoth Iria and Katavasia keep the flame alive. However, my primary dedication is to those top 3 for sure. In this group of primordials I would add Thou Art Lord. But I believe I have dedicated a large part of my life to Rotting Christ. In the group of younger bands it is still possible to add Dizziness. 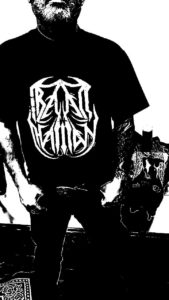 The band has only been around for a while and even so you’ve already released a demo with almost forty minutes of music. Did you guys have anything ready before the official creation of Torches Of Nero or did things really flow fast?

Things flowed fast. The only song that was ready since Oct 2020 was Kleronomia kai skotos.

The lyrical part of Torches Of Nero seems to be very rich. I know you really study the topics covered by the band. What is the importance of knowledge and content in the lyrics of a Black Metal band? I ask this because with each passing day we see more and more bands using black metal just as an “artistic expression”. What is your view on the subject?

My personal opinion is: above all it is a spiritual philosophy, a path to be chosen and sorted out in a solitary way. This study is almost like a scientific method and is taken very seriously. I don’t believe in these empty “Hail Satan” and plastic Baphomets. Our Baphomet is made of flesh, frustrations, sorrows, successes and mistakes. My opinion about black metal is above all: it cannot be devoid of darkness. The aesthetic issue helps but it should be a means and not an end.

Which writers would you highlight within the study of dark paths?

Authors who really changed my perspective:

Michael W Ford  “Dragon of Two Flames” and the “Bible of Adversary”; Emil Cioran (a Romanian \French philosopher) “Breviary of Decomposition” and “El Malvado Demiurgo” (The Evil Demiurge will be the name of our full); Allan Moore and his Swamp Thing; Aleister Crowley; Lovecraft; William Blake; the Nag Hamadi Library and its apocryphal books; Elaine Pagel  “Gnostic Gospels” and “The Origins of Satan”; Paul Carus “The history of the Devil”; Larousse encyclopedia (about the mythologies stirred in my childhood for sure); Anton La Vey and his Bible; The writings of Liber Azerate…I think these are the main ones among many.

What can you tell us about the upcoming releases of Torches Of Nero?

2022 will be a year of hard work. We started with a tribute to Sadistik Exekution, named MOKK. An analogy to Mockering. It should come out February/March with 4 songs. Afterwards we will continue working on full The Evil Demiurge. Both will maintain the sound and aura of the demo.

This “MOKK” EP that will be a tribute to Sadistik Execution. Can we expect a very different musical approach from the “Fallen Angel of Arcturo” demo? 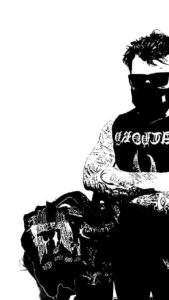 I don’t think so. The sound of the sadistik exekution that we are honoring is that of “The Magus” and that of “We are death…” more than the other albums, as the other works already have a sharper distortion and a different way of execution of the riffs in relation to the aforementioned albums. My idea is that our influences are limited in terms of time to 1994. Maybe if we consider our gigantic Greek Black Metal influence this EP really has a different approach but with the same aura. A time when metal was extreme beyond simple labels that help but can also harm.

The production of the Fallen Angel of Arcturo demo passes on that recording energy made with the greed to be organic. How do you see the excess of technology when it comes to a band production. Are the new resources beneficial or can it take the soul out of the sound?

Yes, you are absolutely right!! We wanted to do something true to the old days. As it was done in demos like “Satanas Tedeum” or in the “Passage to Arcturo” . We believe it matches our proposal. And maybe you’re correct, a very polished production takes some of the evilness out of the sound. However, I think it works according to the proposal. To some bands with more ethereal sound like Midnight Odissey, with a lot of ambient sound, an empty sound is in line with the proposal. It’s just an opinion, everyone does what they want and reaps the fruits of it or not. For us the more raw the better.

And about the first full “The Evil Demiurg” what will be the lyrical and musical approach?

The approach will be about the mythology/gnostic approach about the Demiurge, the creation of man and Sophia and knowledge. However, the idea is to use an approach similar to what Emil Cioran used in his book. The creation of man as a mistake, existence as a meaningless end and error in the Anthropology of man and his relationship with his absent superior being. The music of this full will keep the idea of ​​amalgamation between Greek Black Metal and Brazilian Extreme Metal. Let’s improve this interaction.

What about shows. Your sound seems to be made to play live. Can we expect presentations soon?

I think it’s extremely possible that we’ll play live at least once in 2022. And yes, I agree with you, our sound is made with that in mind too. Like Venom and other bands that don’t seek technical perfection but transmit an energy of destruction playing live. And we await invitations to a ritual sacrifice. Let’s see what the future holds in this regard without creating too many expectations. I think that what counts live is the aesthetic charge as a means to spread the message. Although we are an old school band I believe that it is possible to develop something around our idea. 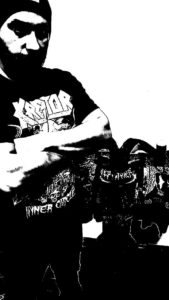 About these future releases do you already have a label in sight?

We’ve talked to many labels and had the interest of a major national label “Hammer of Damnation” which makes us very proud. My old man first of all. Warlord is THE guy. I really respect his metal history. Evil is a band that I really like and his work at Hammer/Black metal store is awesome. So I can only be proud that he liked it or sees some potential in Torches.

Brother, The space is yours.

First of all, thank you for the possibility of talking with you J.A.M and with Black Metal Terror. It’s important for us to be with people, zines and labels that think like us. Darkness and knowledge above all. Black philosophy above all. Art must be secondary to essence. This is the star of tomorrow that guides us daily and makes us grow alongside people like you J..A.M and Black Metal Terror. Thank you so much for the opportunity old man!