Born in 1998 in Hyvinkää, the band AZAGHAL is a strong name in Finnish Black Metal that in its two and a half decades on the road has already released 11 albums, among which some classics that we can mention such as the first album “Mustamaa” and its successor “Helvetin Yhdeksän Piiriä”, both from 1999 and needing no introduction. To talk more about this trajectory Narqath guitarist and the only remaining original member of the band spoke to Black Metal Terror…

Azaghal is on the road since 1998, late 90’s. Azaghal was the first Black Metal project that you were involved with?

There were some unremarkable projects before, and Azaghal operated under a few different names, but yeah, it was the first more serious band.

The first album “Mustamaa” was released 20 years ago. What have changed in Azaghal since then?

Mustamaa was released by Melancholy Promotion on vinyl in 1999, so 22 years ago now. A lot has changed since then, I am the only original member left and we have started playing live and developed as musicians and composers. But the fundamentals have stayed the same, it’s still pure black terror metal with mostly lyrics in finnish language.

Narqath has been the mastermind since the beginning. And he has played a good variety of instruments in every album. How does the creative process work? Which comes first, lyrics or arrangements?

It varies a lot, usually I have some lines written and when I come up with something inspiring I start to develop the themes for the rest of the lyrics and music from there. Then I record demos in my homestudio to send to our drummer, Lima, and we start completing the songs together from there with him.  We usually never rehearse full songs before recordings, we all work on our own. Been this way since mid-2000, it’s just easier and less stressful now that people in the band get older and have jobs and familes.

After this long time Azaghal exists. It is still full of misanthropy, grimness and brutality.Do you believe that the last album “Valo pohjoisesta”, is following the same line as the ones that came before it? I mean you seen to mix a variety of mythology  on your albums. This one has something about the “Aztecs”. How is it like taking the Aztec mythology to the Finnish language?

Thanks for the compliment on Valo Pohjoisesta! Yeah, it’s always been this way with my lyrics, I take the darker aspects of different mythologies and mix them together, but usually they deal with the same subjects, just from a different perspective. I find it fascinating how much similarities there can be in nearly all the myhologies of the world. For example, on the album Omega, we had the song Quezalcoatl, well, obviously about the feathered serpent. And now on Valo Pohjoisesta we have Taivaan Käärme Nielee Auringon (The sky serpent swallows the sun), which is similar but a different mythology.

How would you describe the musical progress over the year? Black Metal has also changed and evolved a lot too.

I think our music has become more varied along the years, but the basics remain always the same with Azaghal. But speaking about Black Metal in general, it has divided into a thousand subgenres and most of them have nothing to do with black metal according to me.

Do you thing Azaghal has mixed different elements into Black Metal or do you believe that you guys are straight forward like in the album “Nemesis”?

Sure there are some influences in certain riffs from other genres, but the main point has always been in relatively simple and straightforward black metal since we started the band.  Funny enough, I actually find Nemesis to be our most varied album in fact.

What are the main influences of Azaghal? And how do you see Black Metal nowadays?

My main influence has always been the 90s norweigian scene, at the time it was nothing I had ever heard before. I was into death metal before that, but the 90s black metal scene was just something completely different both musically, lyrically and visually. I honestly don’t follow nowadays black metal scene that closely. To me it seems like bands make 1-2 decent albums but then they start drifting further away from their roots already which I usually hate.

What direction do you see the Black Metal music heading into in the future with this whole technology we have nowadays. You can record a full album in your bedroom and sell it online. Do you “miss the old ways”?

Both yes and no. Since we mostly record in our bedrooms nowadays too heh. Of course the old days of tape trading and ordering demos were the coolest, but honestly, I don’t think I would have even the time or energy for that kind of thing anymore. I do still collect vinyls and CDs, but having spotify and bandcamp especially when you are travelling a lot is extremely convenient.

Now we are living a pandemic year (again!), talking about live gigs, which was the best festival or event Azaghal performed so far?

Our first time in Under the Black Sun festival in 2004 was really memorable, because it was the first Azaghal gig ever, and pretty much the first time several of us were abroad I think, also Steelfest in our hometown of Hyvinkää is always very special for us. There starts to be so much that it’s hard to remember which was which anymore, lots of killer festivals. I am sure the festivals in Brazil were also great, but unfortunately I was unable to travel there, so can’t comment on those.

.Any plans for touring in 2022 or nex year? How are the events and concerts in Finland this year?

So far no plans at all. Everything we have planned just gets cancelled, so it’s kinda pointless at this point in time.

What Black Metal album would you like to have recorded and released? Why?

Darkthrone – Ablaze in the Northern Sky or Emperor – In the Nightside Eclipse. Simply perfect albums and the ones that really dragged me into black metal. And let’s throw in Dödheimsgard – Monumental Possessions too because it’s just perfect.

What are you listening to nowadays and is there any band that you would recommend to our readers?

I mostly listen to a lot of classic rock, like Blue Öyster Cult, old Alice Cooper, Kansas and Black Sabbath. Then of course the black metal classics and old swedish death metal like always. As far as band recommendations go, check out finnish Malum, Kalmankantaja and Morgal if you haven’t yet.

A lot of people say that “Valo Pohjoisesta” was one of the best released from 2018. How has the feedback been so far?

The feedback has been very positive, and we have toured and played more festivals than ever on our career, it’s also very much because of the support we got from our label Immortal Frost Productions. Our few previous albums I suppose no one even heard since there was zero promotion.

Is Satanism and Occultism or “Luciferianism” mandatory in Black Metal? Should Black Metal be satanic?

Yes, according to me it absolutely should. No matter what other subjects or mythologies you explore, there has to be the underlaying message and devotion in your lyrics and music.  Why bother calling it black metal otherwise? I don’t think it’s much of an selling point these days, on the contrary.

The main man behind Azaghal ” Narqath” has a lot of projects besides Azaghal. How does the other projects affect the way you compose or make music?

Nowadays I am pretty much only doing Azaghal and Wyrd, because of lack of time. But having different outlets for my different ideas helps me keep Azaghal so more pure so to speak. And it has a lot to do with mood. I need a very specific mindset to make Azaghal. It depends a lot on what I am doing or reading at a given time, but I always now immediately what a specific lyric or a riff is for.

What about the other band members? In which projects are they involved nowadays?

Our drummer Lima plays in a ton bands, from black metal to power metal, you name it. Some bands include Amberian Dawn, Thaurorod, Scarecrow. Our other guitarist, Agares, has his own Commander Agares project and our new bass player Grim is known from Kalmankanataja and Lathspell among other bands.

What have you heard about Brazilian underground or Black Metal bands? Have you listened to anything so far?

Like with most new black metal, I am a bit out of the loop with the brazilian scene, but I of course know the classic bands  like Murder Rape, Ocultan, Miasthenia, Thallium, Thy Light, Patria etc. etc. just a ton of bands with their own specific killer sound. Not forget the old gods like Sarcofago, Vulcano and old Sepultura.

Thank you for this interview and for sharing your ideas with us. Send a message to our readers,  please! We have a lot of Azaghal metalheads here.

-Thanks for your undying support and hope to see on tour ! Hail Satan. 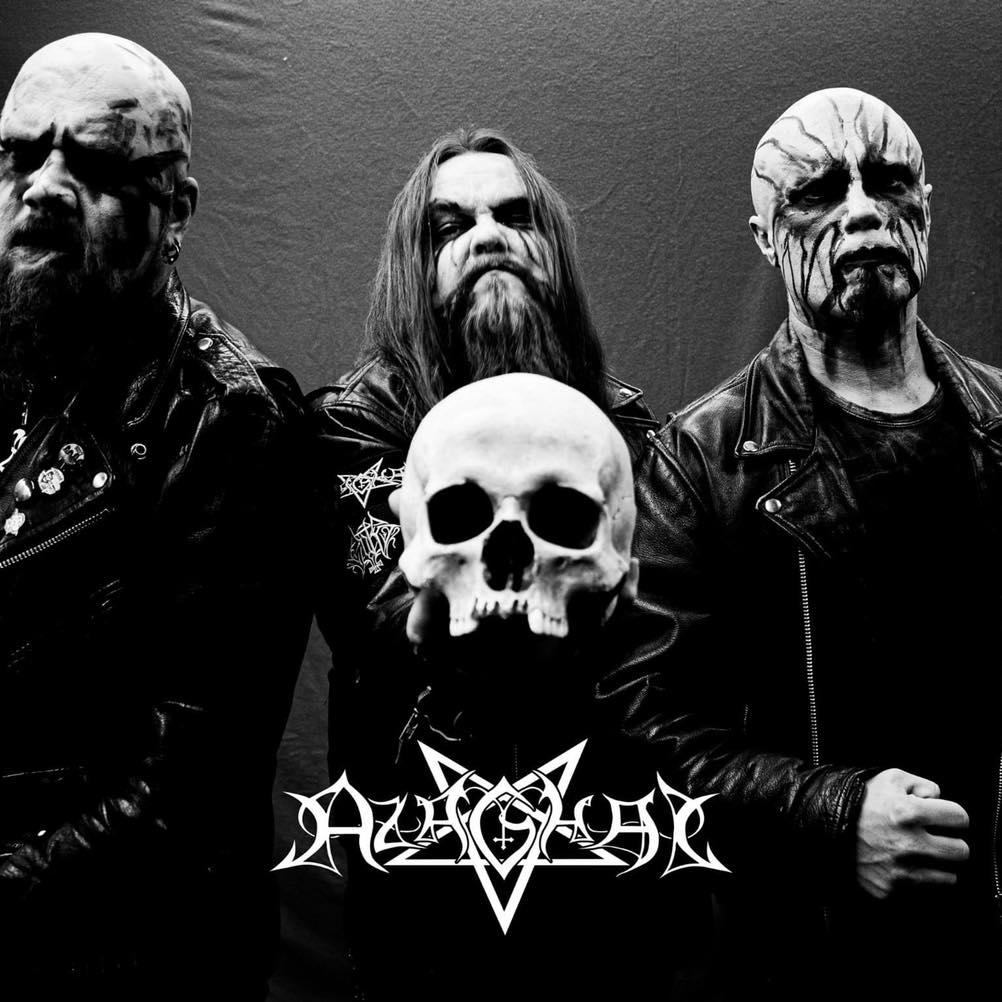