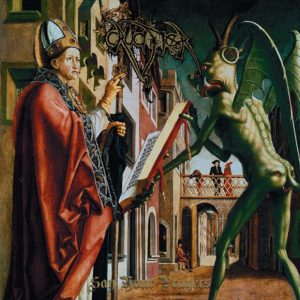 Formed by Cazz Grant in 1990, the North American band Crucifier is part of that country’s Death\Black Metal elite along with masters Von, Profanatica, Havojeh, Grand Belial’s Key, among others who created a style shared with South American bands and even even European ones from the late 80’s and early 90’s. Listening to “Say Your Prayers” and its 26 minutes it’s possible to arouse different feelings. The first one is nostalgia. How good is this extreme metal style. Fuller sound, vocals with echo, music with rhythmic simplicity, without those blasting beats that are not extremely necessary. The second feeling is that Crucifier seems to know where they want to go with this EP, that is, at the top of the bands that perform this type of sonic aberration without having to execute mathematical formulas to bring all the fallen angels from the bottom of hell.

About the songs . “My soul to take” opens the mini album with a small intro and then a riff à la Sepultura’s Morbid Visions, Sarcófago, Profanática. Vocal with echo in the off beat offers to the listener the nostalgia above mentioned.

“Foul Deeds Will Rise” starts with a fast rhythm and blasting beats à la Sarcofago. The vocal maintains the aforementioned characteristic, this sound has a first more classic solo and another with Slayer-style pinches. These sonic characteristics, mid/late 80s pile-driver drums and guitar solos are also on “Into Ash” which still features a heavy slow passage with a solo slipping into a Slayer-like tempo (Piece by Piece). “Chime of the Goat’s Head Bell” starts with a morbid bell setting the tempo of a fast beat that drops into a riff inspired in “Hellhammer/Celtic Frost” and even the Austrian Miasma to later return to a faster performance that reminds the Canadians Angelcorpse.

“Jesus Hitler” needs no introduction. Peter Steele remains present among us and in this sound that is 35 years old he expressed all his sarcasm. “Jesus Hitler! Adolf Christ! Is this the Second Coming? Or the Fourth Reich?” lyrics that today would certainly be at the mercy of the lamentations of the “Care Bears” who always see the world from their perspective of slavery to the dogmas and psalms of the Talmud.

This Crucifier MLP is, above all, a great album that crowns the return to the sound of “Crucifier” (1995 compilation) and their first full album “Stronger than passing time” from 2003. All this exposed in a luxurious booklet with lyrics gilded in Germanic Fraktur font. For lovers of extreme metal roots, this record is mandatory and perhaps this is the best adjective to be offered to this Iron Bonehead release, available in Brazil through the Black Metal Store here (CD) and here (MLP).