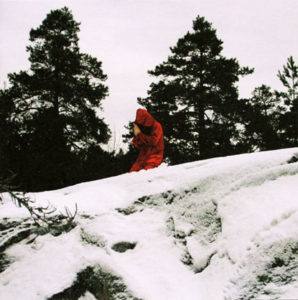 “Ylistys”, the second album by the Finnish Cosmic Church originally released in 2013 is a journey through dark feelings. It brings up several memories lost in more than 30 years of this style that somehow started with Burzum more than 30 years ago in the execution of a colder black metal with some melody and that expanded and broadened its spectrum with the , also Finnish Satanic Warmaster.
In fact, Werwolf’s creations are echoed in the work of Luxixul Sumering Auter, leader of the Cosmic Church and responsible for the entire conception of this magnificent expression of art.
Starting with the beautiful cover art of this record that suggests something transcendental. A person in red ritualistic attire on white snow as evoking ancient nature spirits really makes a great visual impact. That impact continues in the music. “Luon perustani sinun kallioosi” starts quickly with a melodic riff played repeatedly trying to cause a kind of trance (something like Jesus Tod from Burzum or Opferblut from Satanic Warmaster). The second song ‘Nakyja indigolahteelta’ keeps the same influence but slower, including a keyboard à la Burzum from the Hlidskálf album. However, the way the vocals are placed and the slower riff with melody reminded me of the Americans from Nachtmystium from album Silencing Machine or the also Americans of Leviathan, an impression that even later with the increase in the speed of execution of the song remains.
“Ennen” starts more slowly, almost like a waltz-folk (something along the lines of Black Winter Day by Amorphis or Burzum in the song Jeg Faller), a Black Metal with strong Doom influences as if the songs of Katatonia’s first phase had been recorded dirtier and low-fi. The Doom influence in this song is undeniable, including a very well placed solo that is repeated a few times, moving to a very fast passage but with a lot of melody that maintains the aforementioned influences, later returning to the folk side of a waltz with a beautiful background melody. “Maailmojen peilin takaa” retains the structure of the previous song with less melody in its first passage, it is almost a continuation of the previous song bringing to mind similar references. However, the track is cut by a tempo in a dissonant riff and then the rapidity of a cold line always with a background melody. “Lupaus aanettomalle aanelle” starts with a slow dissonance that leads to a The Sign of an Open Eye like Gorgoroth’s conduction accompanied by a clean vocal that recalls at some point the epic vocals made by Enslaved, which despite being intercut with fast parts always with a background melody is what permeates the whole song. “Katketyn tulen vartija” refers again to the more atmospheric doom side with guitar liks with a strong influence from that early 90’s Doom, which offers a soundscape with a lot of melody and a dissonant background riff that reminds, when associated with the vocal to American black metal icons Xasthur. “Taydellisen valon aarella” finishes the record more quickly closer to the influences of his Finnish compatriots Satanic Warmaster but which could fit perfectly into many of the references above. A dirty rhythmic riff in the background with a beautiful melody over it and a tempo that evolves almost epic that culminates in a pause where the guitar strums a base for the entry of a solo with strong folk influences that have already appeared at other times on the record and that refer to melodies made by Finnish extreme metal legend Amorphis in its various phases, ending with an epic clean vocal and a beautiful but melancholy melody.

This is a beautiful work of extreme music. Summarizing it to the term “ambient black metal” is perhaps too little because this is too simple a conception and that perhaps does not reach the depth of this music and cannot express everything it conveys. It’s a black metal record that features doom, folk elements permeating the entire record and giving it an aura of nostalgic reminiscences of the past. More than that, they allow a connection with something transcendental present in the blood and in the archetypes lost in nature.

Note: For those who are curious (like me), the translation of the song names from Finnish to English:

1.I create my foundation in your rock
2. Indigo font previews
3. Before
4. Behind the mirror of the worlds
5. Promise to the voiceless voice
6. Hidden Fire Guardian
7. By the perfect light

COSMIC BURIAL – …to the past