SCHRAT is a German Black Metal band that in my opinion has a strong individual identity within the style and most likely this has a lot to do with the personality of its mentor, the iconic Gråin, a guy who has been a member of several other projects. such as Gråinheim, Schyach, Ravnsvart, Aegrotationis and who really lives Black Metal. This interview was supposed to be in the third issue of our physical magazine and was conducted in the second half of last year; however we had a considerable delay due to situations beyond our control and in addition the band released the excellent album “Seelenfresser” at the end of that year. Our intention was to update this conversation and include it in the upcoming magazine but to our surprise we found out that Gråin is in prison right now and the band’s future is uncertain. In the words of Nefastus, the band’s drummer “Due to personal issues, he (Gråin) wouldn’t be able to keep the band going…”. Officially the band dissolved but it may happen that it just went into an involuntary coma, but while things are not resolved we decided to publish this, that could be the last interview of SCHRAT here. 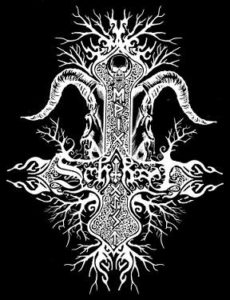 The band was formed around 2003 and the first full length came out in 2009 ”  Bestimmung Raserei”. It was an independent album, how was recording by yourselves and release it?

Back then we were unexperienced with recording and also with the usage of our instruments. I think i was playing the e-guitar for 1 year at this point of time when the band was formed. We were young, furious, full of hatred and drunk and we did not have the big plan how it works like it is today. The recordings were chaotic and took place in our former rehearsal room. Previously we recorded with an old cassette recorder in the middle of the room so it was a small step forward to at least using microphones for all instruments. When i listen to it nowadays i would change many things but it is a lookback at another time and somehow nostalgic. At the time of “Bestimmung Raserei” we hadn’t thought about a label and just wanted to finish it off for ourselves. This further developement began with “Schattenwahn”.

“Schrat” is a one-man band project nowadays? It had some band mambers by the release of the first relase.

There were many members that have come and gone with different reasons but it has never stopped me to continue Schrat. I taught myself everything by watching and listenting and that made me independent over time. The songwriting nowadays i do with programmed drums at my home studio but i do not record them. The studio-drummer for this is Nefastus, a former member of Belphegor.

Now you are signed to Folter Records, what have changed since 2003 and 2022? How do you see this evolve of your sound?

For sure many people would say that the fat produced sound of  the second full length “Schattenwahn” would be the best but for me it is important to have a more raw sound like it is at “Alptraumgänger”. It was so to say a step back towards more brutality. I like the freezing atmosphere and the wooden drums more and it will stay that way! I want to get goose bumps when i listen to it. That is the unmistakable sign that it is the right way. It has to be the same feeling as when i listen to the black metal of the 90s which i still prefer mostly.

How’s the metal scene underground in Germany nowadays? We had a lot of bands that inspired Black Metal in the 90’s  ans late 90’s, like ABSURD.

About the scene nowadays i cannot say really much because of my withdrawal 3 years ago. Something has changed and it didn’t feel like the time that has shaped me when i was younger. I think this is due to the general domestication, effeminacy and a movement closer to the mainstream which is the pure poison for black metal. Antagonists should not shake hands!

You are active in a lot of projects. In which ways are they different from SCHRAT ?

Over time Schrat has received several emotional and stylistic upgrades that are very important for me to let out but i did not want to mix it all up in one band. That would have had the consequence of constanly changing instead of developement so i decided to split them off for other projects. The same happened with the lyrical themes. The only lyrical parallel of all projects is nature and misanthropy.

The last album is “Alptraumgänger”. How has been the acceptance of this album in the underground?

As it is more like a EP with 4 new songs many people were upset about it but this was a period of Schrat with 3 full-members and to put in new songs that emerged afterwards would have missed the idea of completing this chapter as a 3 man band. In this case it was also fair to the others to get a release with membership from the beginning to the end. Bad for the fans but good for the members and former members. 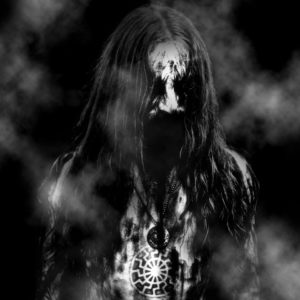 You released a compilation “Ewig Geist / Bestimmung Raserei” in 2020. You are working with different labels. Have you evr thought of going independent?

Since Folter-records only releases full length studio-albums and we already have a common underground handshake business i have the independence i want. The future will show how things will continue after the next album “Seelenfresser” is out this year.

I have ”  Schattenwahn” and “Alptraumgänger”. Your albums are pretty hard to find. in ” Schattenwahn” I think the lyrics are to strong like, death, sorrow and suffering. In general what are your lyrics specifically about?

All stuff can be ordered on the bandcamp-site with world-wide-shipping (https://schrat.bandcamp.com/). In “Schattenwahn” the lyrics of former singer Dragg(Nastrond) had many personal emotional aspects of his inner live and also the relationship between us and our environment. Some were also about moments when we pissed of each other under the influence of drugs. Now we do this through art. We hate but respect each other and our skills at the same time. The lyrical core elements nature, misanthropia, blasphemy, death, rune-magic, blood-magic and the quintessence of a creature with different facets incarnating all this themes, the “Schrat” did not change. The “Alptraumgänger” (nightmare walker) was a conjured spirit who haunted humans in their dreams. The upcoming “Seelenfresser” (soul eater) will be a three-headed creature bringing the apocalypse over humanity in a conceptual inverted bible invocation. The focus of this album is therefore mainly on blasphemy.

What bands have you been listening you recently? Any recommendations?

I mostly listen to older publications of the 80s and 90s or things that sound like them, for example “Erzebet”, “Hexen Blood” and “Ancient Mastery” at last.

You have other projects like “Blutwald”, “Gràb” and “Gråinheim”. How different they are from Schra? Could you describe them? And let us know if there is anything new from them or other projects you are working on?

I don’t think that “Blutwald” will ever go on, but we will see. The bandleader “Gestalt” is currently active in other projects. Gràb is close before the first debut-album and a 2-man project with former “Dark Fortress”-singer Grànt(Azatoth) and some guest musicians. The main influence of this project is “Lunar Aurora” and the lyrical themes are bavarian nature and death. Gråinheim is probably the most personal project as you can logically infer from the name. It is about my personal path of darkness, hatred, satanism, to be more precise luciferianism, murder fantasies, border crossing & witchcraft, in other words my personally isolated dark kingdom cut off from the people contaminated broken sick world around me. All 3 projects are active and will be fed with new publications!

What do you think about the ANTIFA protest and cancelations on bands and BM events? Have you suffered any censorship as an artist? What do you say about that?

I have problems with this genetic disgusting human waste since many years, both as an artist and privately. In my opinion these are the greatest fascists of the modern world! They want to tell people how to think, how to live and what music to listen at. Those who kneel before them are cowards without backbone and like a dumb horde of sheeps! Black Metal is the kingdom of goats and wolves, there is no place for sheeps! I also do not see any difference to religion in this social movement. 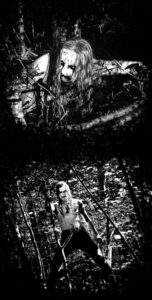 What band are you listening to? Could you do a list with your 5 top albums of all time?

Lets make it the personal top 10 list but of course there are a lot more albums:

What are your main influence? Is it the same until nowadays?

In principle nothing has changed since the beginning. I just got older and gained more experience and intensity in all these mentioned topics, instruments and the black arts. The darkness still surrounds me and i feel good in it.

What bands do you think are shaping the BM scene in the XXI century?

I don’t know to be honest but that is also not important for me because it has no influence on my work.

Thank you for your time and patience. The message to us, its up to you!

There is nothing to add except stay true to yourselves and keep the underground alive!

COSMIC BURIAL – …to the past