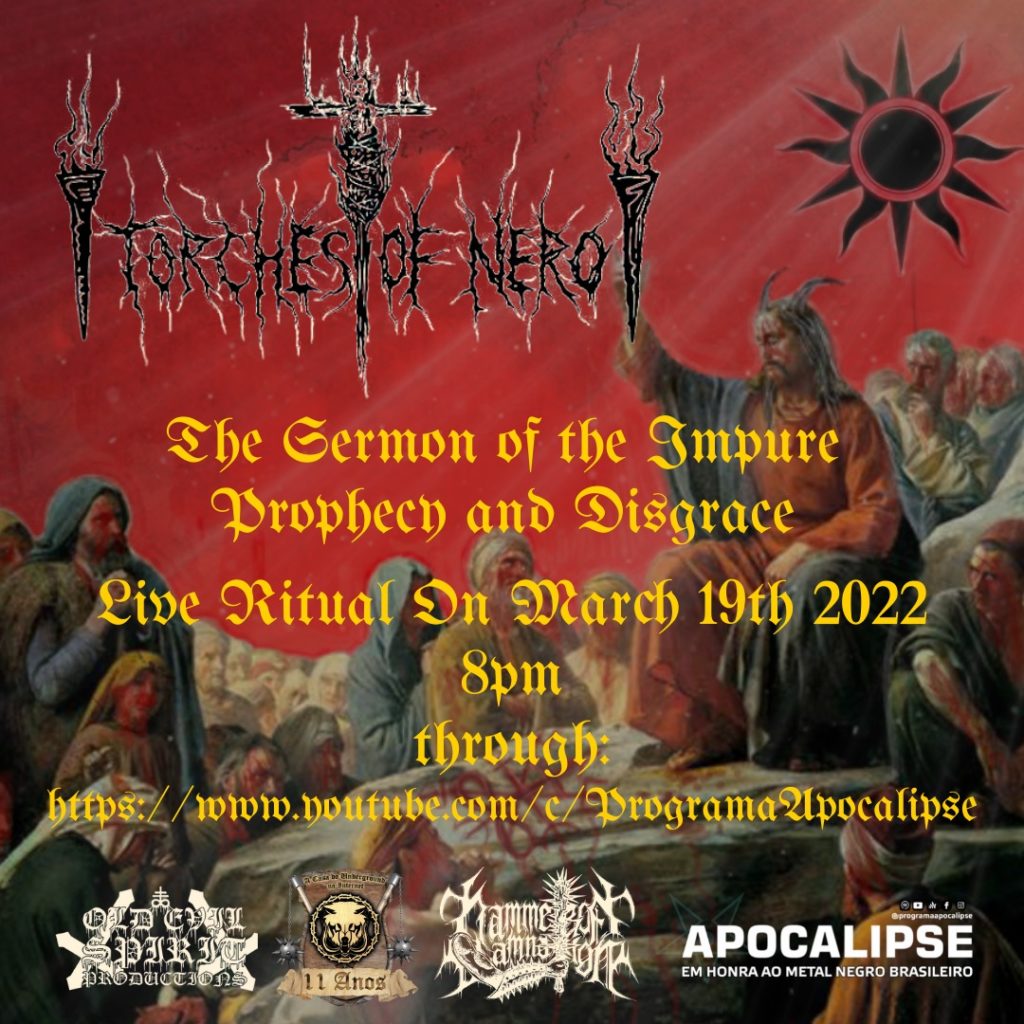 In order to promote the live “The Sermon of The Impure: Prophecy And Disgrace” the band “Torches of Nero” released the following note:

On March 19, 2022 at 8 pm the Live Ritual “The Sermon of The Impure: Prophecy And Disgrace” will be presented in partnership with the show “Apocalypse” by Dark Radio

This performance will see the band playing songs from the “Fallen Angel of Arcturo” demo and some songs from the “Mokk” ep, which pays homage to Australian band Sadistik Exekution which will be released by Hammer of Damnation. In addition, the song “The Sermon of The Impure: Prophecy And Disgrace” and “The Birth of A Lie” released on December 24th will be presented, both dealing with millenary lies that have been told to us.

The song “The Sermon of The Impure: Prophecy and Disgrace” deals with the fallacies of the Sermon on the Mount.

Why prophecy? because the message comes from elsewhere, in this specific case from the light that is born out of darkness, from the abyss of Daath, from the light that radiates from the Morning Star. We are just portals, passages through which darkness and dark light manifest through deeds and words. Nothing else. There is nothing programmed, each song name, each riff is born from a mystical process of connection with our most hidden interior. And so, we give voice to the abyss in different ways, without following the standards, dogmas and rules imposed. Everything we do follows this form.

Why disgrace? Disgrace in theology represents the loss of faith. Faith is something acquired, despite believing that man today, after thousands of years passed in which humanity first sought on earth and then in heaven the idea of ​​salvation, of transcendence, of something more about us, capable of coordinating our life or influence its results, that perhaps this humanity is incapable of living without believing in lies. We are animals destined for error, failure and there is no entity, deity, theology or ideology capable of changing our evil nature.

The show is a record of a dark music ritual alive with no flaw editing, no overdubs, no embellishment. Dedicated to the Great Oracle Jon of the band Dissection, now deceased.

Black Metal in its purest essence. Art at the service of the message that comes from the darkness above all.

The link to the show will be made available on the Programa Apocalipse youtube channel on March 19, 2022.

Thank you to everyone who supports us on this journey.