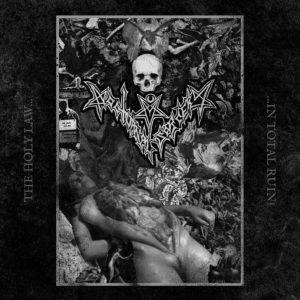 With each passing day, we see more and more bands trying to be creative and stand out from the crowd, seeking to somehow innovate within Black Metal, be it bringing external influences to the style’s characteristic sound, something that sometimes can result in some weirdness, or trying to “look extreme” visually, something that can result in a band with a very flashy “package” but little content. On the contrary of such innovations, the year 2022 presented us with the first full length by the Finns of the Nocturnal Sorcery “The Holy Law in Total Ruin” and what we have here is the purest and most traditional Black Metal, profane, hateful, full of rage, blasphemous, and yet with that melodic touch that sounds like drops of honey that sweeten the poison ingested. The band is formed by members and former members of fellow countrymen Sadokist and Daemonlust and before this first album they released two demos respectively in 2014 and 2019 and a split cassette with the aforementioned Daemonlust in 2017. For those who are familiar with the Brazilian underground Black Metal of the 90s, more precisely that niche that existed in the interior of the state of São Paulo, “The Holy Law in Total Ruin” brings some compositions such as the opening track “Ro’iheyav Ro ‘ihey Mihole” and “Fatum Nostrum (Damnatio Memoriae)” which, surprisingly, brought to my mind some bands from that time that used that musical formula composed of raw and cold riffs and that alternated in very striking cadenced tempos with extremely fast passages, I don’t believe, however, that this similarity is something intentional, despite the band having already made a cover version of Sarcófago’s “Black Vomit” in their second demo “Symbols of Violent Death”. The album also brings some compositions with ambiences extremely loaded with chaos, dissonances and heavy musical schizophrenia, as in the beginning of the already mentioned first track and in the title track that brings a dark soundscape that seems to open the portals of hell and release its damned content on the world. Some compositions have a more melodic backbone like “Blackhearted Angel’s Retribution”, the phenomenal “Thy Primordial Flame” that features beastly ultra-fast tremolo guitars alternating with some mid-tempo passages that are impossible not to bang your head and is, of course, the best track on the album for me,”Through Boundaries of time” which features the best vocalizations of Maledictus Vult whose vocals, by the way, are already a highlight and deserve special attention when listening to this album. The final part of “The Holy Law in Total Ruin” takes the mystical hellish atmosphere to another level starting with the sinister track “Down the Valley of Damnation” born from a sample of a Dantesque nightmare, followed by “Miracle of Empty Hand” which is in many ways the most extreme song on this album bringing at the same time the fastest and the slowest moments among the nine tracks that make up this work and finally “The Last Ray of Ihvh’s Light” that ends this work perfectly with its disturbing, gloomy and taciturn atmosphere. Undoubtedly a great debut album by Nocturnal Sorcery showing us that Finland continues to reveal genius exponents for what I personally consider the best Black Metal school in the world. I definitely recommend it… and I highly recommend it.