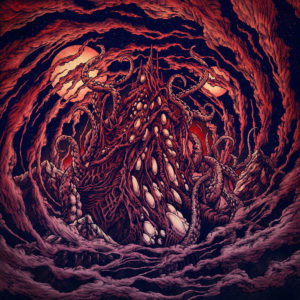 This is not a technical review. If you’re expecting this, I’m sorry to cause you such frustration. This is first of all a review that does not find clear adjectives. Perhaps transcendental would be the closest description to the necessary definition of the newest work by the French entity called Blut Aus Nord.
The band founded in 1994 has a long history of surprising albums that allows the listener the most diverse sensations. Amazement is perhaps the main one.
In my humble opinion, Blut Aus Nord and Deathspell Omega are the bands responsible for the last major change in Black Metal history. With no pretensions of relief in their sound, they bring from the depths a sound mass that sends the listener to the darkness itself. With no intention of pleasing hypsters and similar types who imagine that black metal can be dissociated from these feelings that are inherent to being human and that often just need a spark for the inner flame to manifest and completely change the way the world is. is and must be seen. Without mercy and with a quest for self-knowledge through the darkest.
The album “Disharmonium: Undreamable Abysses” is a portal to tap into that flame. A nexion with another dimension, represented by a vertigo sounding mass that must be transposed by those who dare to enter the world proposed by this band.
The album consists of seven songs that feel like one. All of them overlaid by layers of dirt, rot and immensity. These seven songs take the listener to the worlds of Lovecraft through dissonances and fast drums most of the time, which cross the record associated with melodies, suffering vocals, as if they were spirits that wander aimlessly looking to find the path of the most deep.
For those who know Blut Aus Nord in some depth, musically “Disharmonium” has elements of “Odinist” (2007), as well as the “777-Sect(s)” “777-Dessantification” and “777-Cosmosophy” trilogy (including some dissonant melodies were used on these albums vide Neptune’s eye) mixing extreme metal with something industrial but performed in a very particular way by the band. I could say that this record distances itself from the previous “Hallucinogen” which seems to be easier to listen to but when it comes to the way the band thinks about their work it would be a very superficial view. Blut Aus Nord remains committed to its unique way of expressing your darkness and that’s what matters most.
My highlight for the record is for “That Cannot Be Dreamed” whose title and song remind us that some things cannot be dreamed of.
Another highlight I make is for the lp version with a beautiful slipcase work for the lp and poster with the album cover image.

In Brazil it is available to fans through Black Metal Store and Drakkar Brasil. The two labels also offer listeners other albuns from the discography of this French extreme metal icon.

AD HOMINEM “Black Metal will end up the way it was supposed to be: prohibited music for extreme-minded people.”