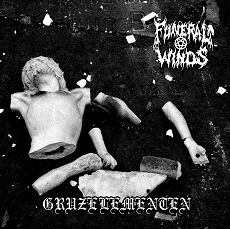 One of the great advantages of a “one man band” is the freedom to do what you want in your music not caring about the opinion of others and if the man behind the project has a clear idea of ​​the whole concept that is wanted, the chance that he can put a part of your own soul in music is very possible no matter the guy’s general skill level with the instruments; I’ve witnessed several projects where the person in charge had a poor grasp of the guitar and still managed to show all his feelings in his music. FUNERAL WINDS became a “one man band” on the 2015 EP “Sekhmet” (this EP marked the band’s resurgence after the release of their third album “Nexion Xul – The Cursed Bloodline” released in 2007) and here the plateau of the whole thing is much superior because in addition to the clarity of vision that his mentor Hellchrist Xul has both the musical part and the lyrics, the production and the entire graphic concept present in each release, his domain and skills with all instruments is very high, which, in my view, gives the compositions a much more direct connection with the entire internal universe of its creator, allowing that all that vortex of negative and obscure feelings to surface in the form of profane, hateful, ritualistic and satanic Black Metal  having the adjective “Satanic” the purest and truest connotation the word can contain.

“Gruzelementen” is FUNERAL WINDS’ sixth album and in my personal opinion is, without a doubt, the band’s best release since its formation back in 1991 with six superb tracks in just over half hour long. The most interesting thing about “Gruzelementen” for me is that all six compositions presented here maintain the highest level of excellence, the quality of the tracks doesn’t drop at any time, the instrumental can vary from extremely fast and hate-filled moments to more lilting and obscure with extreme aplomb, always keeping an apocalyptic atmosphere in the air.

Because it is an album with such high cohesion it is very difficult to highlight any particular track but we can mention the beginning and end of the tracks “Dark Rays of His Splendor” that opens the album, “Lunar Darkness” and the end of the last song on the album “The Sword of Satan” which are soundscapes carved out of pure Ritual\Dark Ambient music and yet fit the compositions perfectly. It’s impossible not to mention the aforementioned opening track “Dark Rays of His Splendor” which opens the album in a bombastic way with its extreme speed and yet still having bass lines with an extra load of melody that manage to enrich the song even more. This more technical and melodic bass also shines on the track “Night of Reckoning”, the best on the album in my opinion and where the interaction of those same lines with some vocals border on perfection; on “The Age of Fire” Hellchrist’s vocals are particularly malevolent, oozing hate like poison and guiding the entire dynamic of the song, and the title track “Gruzelementen” which alternates fast tempos with a more lilting riff that is probably the most overflowing moment of feeling of the whole work.

“Gruzelementen” turns out to be one of the best releases of the style this year and certainly marks the highest point in FUNERAL WINDS’ long journey into the underground and is a must-have item in the collection of all those who appreciate the band. Mandatory, don’t question it, just buy it.